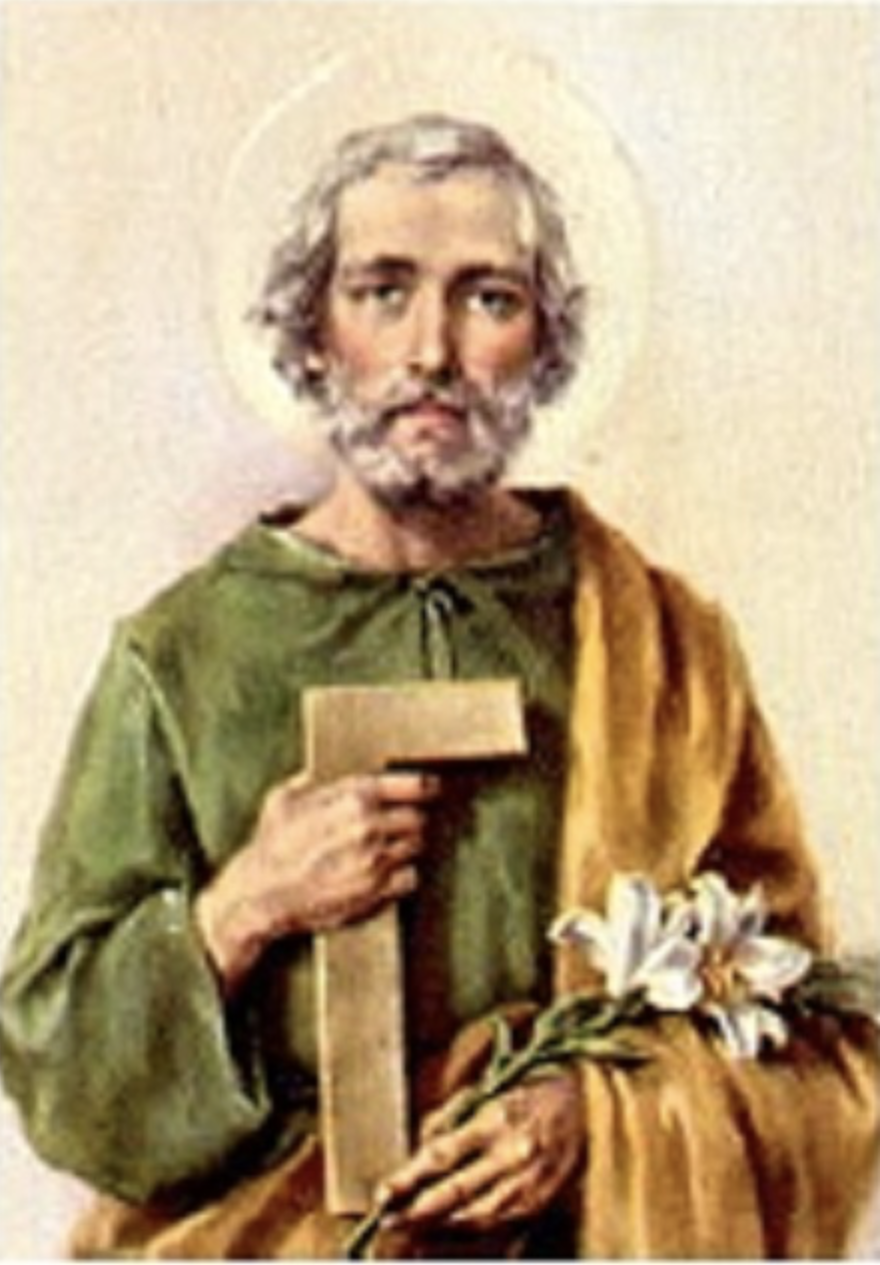 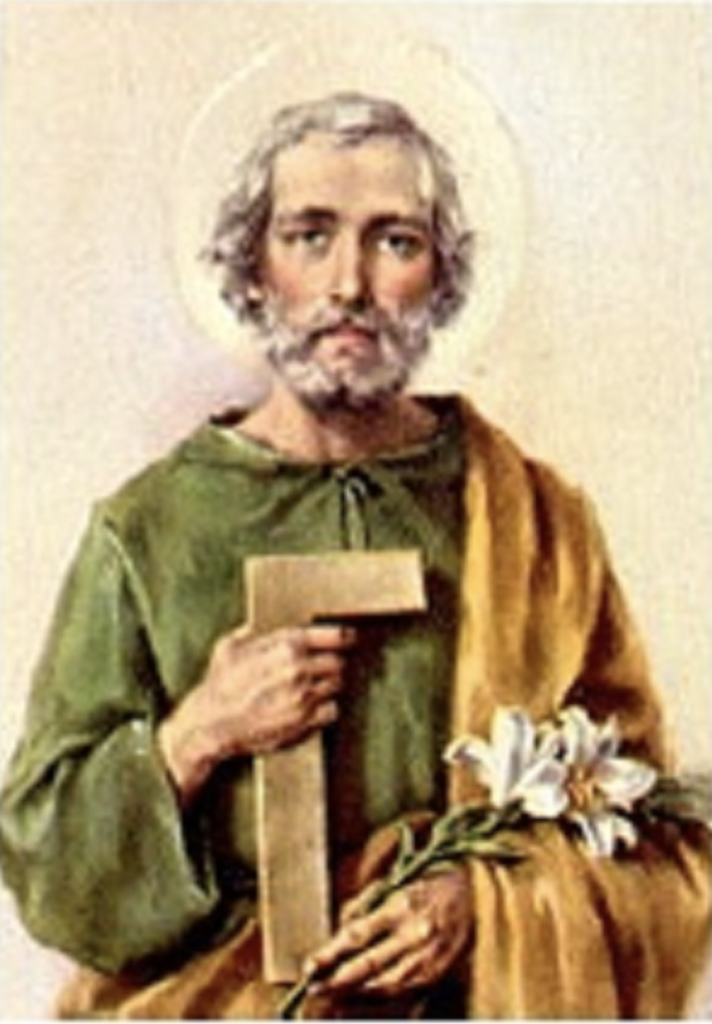 In this art, Joseph holds a square and blossomed lily. Symbolic of His Divine Role

“Now the birth of Jesus Christ was on this wise: When as his mother Mary was espoused to Joseph, before they came together, she was found with child of the Holy Ghost.Then Joseph her husband, being a just man, and not willing to make her a publick example, was minded to put her away privily. But while he thought on these things, behold, the angel of the Lord appeared unto him in a dream, saying, Joseph, thou son of David, fear not to take unto thee Mary thy wife: for that which is conceived in her is of the Holy Ghost…Then Joseph being raised from sleep did as the angel of the Lord had bidden him, and took unto him his wife.”  Matthew Chapter 1

Very little is written about Joseph in the New Testament Gospels, and yet, what little we do know gives great insight into his character.   Joseph is “betrothed” to Mary, and he is described as a “just” man who is not willing to “make a public example” of Mary.  What do these scriptural phrases mean, and what is the context behind it?  What kind of man was Joseph?

Betrothal in Jewish custom at this time, was just as binding as marriage.  It was a promise made to God that was also binding under the law—making individuals subject to the punishments of the law.  Under the law, a woman caught in the act of adultery could have been stoned.  As part of her public shame, she would have also undergone a ritual to determine her guilt known as “The Ordeal of Bitter Waters.”  This ritual has great symbolic significance.  Water, in its purest form, springing from a well or “moving” source, without impurities and dust from the earth—moving and living, is symbolic of the purity of the holy spirit springing up unto everlasting life in the individual.   So what does the opposite (The Ordeal of Bitter Waters) symbolize?

If Mary had been accused of adultery, she, as the suspected adulteress, would have been forced to  stand before the elders where her hair would have been exposed, her clothing ripped from her chest to expose her heart and breast bringing her to a point of shame, and she would have been forced to  drink from a bowl of “bitter water.”  The water was placed in an earthen vessel and dust from the ground would have been mixed into the water.  She would have been forced to drink from this bowl, and upon consumption, symbolically and spiritually this act of adultery (in ritual form) placed a curse upon her womb. This ritual was not only symbolic of a  curse that was placed on the woman’s womb, but also on her ability to bear future “seed” (posterity).  This womb which produced future “spiritual seed” would be cursed.  (Does this sound familiar to a conversation the serpent has with God about the seed of the woman in the Garden, because it should.)  The woman receiving this ritual would have felt shame, embarrassment, and fear, not to mention bringing shame to her family and associates, for generations to come (Numbers Chapter 5).

THE BALANCE BETWEEN JUSTICE AND MERCY

The word “testament” means covenant.  Our Bible is paired—the Old with the New Covenants.   The transition between the Old Testament and New Testament is symbolically like the balancing of two scales.  The symbol of perfectly balanced scales of justice and mercy is one that has existed anciently throughout all cultures.   It’s in these moments, where the scale is balanced, that God reveals his mysteries to us, and it is in this moment that an angel of the Lord unveils God’s purposes to Joseph.

Joseph is described in Matthew Chapter 1, as a “just man NOT WILLING to make a public example” of Mary.  Does this phrase have more meaning to you now?  The word “just” used in Mathew to describe Joseph comes from the greek word, dikaios or δίκαιος.   This word literally means, “just in the eyes of God, righteous, or elect.”  It is in this moment, when Joseph forgoes the punishments of the law for the mercy revealed under the spirit, and then while he is thinking on these things, an angel of the Lord appears and bears witness to Joseph of the divinity of the woman he would marry, for “that which is conceived of her is of the Holy Ghost.”   Joseph DID NOT KNOW that Mary was innocent, and yet, the scriptures say, Joseph “thought on these things” not willing to make Mary a public example.  It is in this moment when Joseph experiences that “balance” found between the Old and New Covenants.  A balance of opposites.

THE OLD COVENANT PREPARING FOR THE NEW

The law of the Old Covenant “revealed sin”, and the Holy Spirit of the new Covenant “revealed” God’s mercy (Romans 7:7).  The law allows us to perceive sin, and the spirit bears witness of his forgiveness and mercy to repentant sinners who turn away from sin.   An “unbalanced” understanding of the law is revealed in an interaction between Christ and the accusing Pharisees when Jesus explains, “But if ye had know what this meanest, I will have mercy and not sacrifice, ye would not have condemned the guiltless.”  (Mathew 12:7).   We see these forerunners—Mary, Joseph, even the Birth of John the Baptist as “preparers. ”  These preparers were, in other words,  a people who were prepared, and were preparing for the coming of The Christ.

This moment when the scales of justice and mercy balance—His divine will is revealed.   It is what He meant when He said, “Think not that I am come to destroy the law, or the prophets:  I am not come to destroy, but to fulfill.” (Mathew 5:17)  Destroy in this context means, “to loosen throughly, break up, overthrow, unharness, unyoke a carriage or pack animal,”  and fulfill means, “to be full, or fill to individual capacity.”   Place the symbolic meaning of that phrase in context,  and  compare it with the actions of Jesus Christ.   The combination of the Old Covenant Laws paired with New Testament reveals God’s true intentions.

THE PURPOSE OF THE LAW

The law reveals what sin is and the spirit reveals His intentions behind the law—to save us from sin and cleanse us from sin—it’s a dual understanding.    Only He can fill the void that we can not, and only we can choose to accept his “filling to capacity” of that void.  I like the idea of “removing the yoke, or unpacking an animal” to illustrate this meaning.  He comes not remove what is necessary for the use of the animal, but rather “lightens” the “burden” of the “animal” so that it can be “filled to capacity” and “meet” HIS full purpose for it (in other words, for us).

MY YOKE IS EASY MY BURDEN IS LIGHT

This is why He, says, “My yoke is easy, my burden is light.”   It’s a path of choosing not to sin, and still realizing that we do and will sin.   It’s the meaning behind the Apostle Paul’s words in Romans when he describes  a law that becomes dead, but also a respect for a law that protects and reveals sin to us.  Its the dual meaning found when we are told that we are “sinners after the flesh” while Christ is also commanding us to be “perfect even as he is.”   It’s the idea that we must be “virgins,” clean, pure vessels, and that in order to do this we must accept a “gift” of his mercy and grace to us because we are sinners.  It’s finding that “balance.”

ANCIENT SYMBOLS OF THE BALACE SCALE 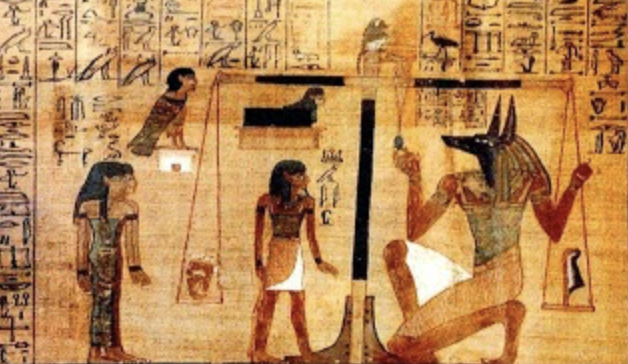 In the image above you will see a balanced scale found in ancient Egyptian hieroglyphics.   In this art, the Egyptian Gods Maat and Themis weigh an individual’s heart and mind against the interwoven and eternal laws of “nature.”   In the Egyptian book of the dead, an individuals heart is weighed on one end of a scale and the “feather of Maat” is on the other end.  It was a measure of one’s participation in the earthy order of the world, and the balance of the scale determined whether or not one “passed” into the next world.   Lady Justice is found standing between two pillars on opposite ends, and the sybolism of this image is one in which individuals find truth or balance between two opposites.   It’s upon these same principles that our own government,  The Constitution, was founded—the belief that two opposites point individuals to the balance found in the middle.  Finally, God’s Laws, also known as the “torah,” for those who live it, they are promised that they will partake of the Tree of Life–because the Torah is the Tree of Life.    These same principles are found in the “balance” of the Old and New Covenants where God “unveils” his true purposes to His saints.  Can you “see” the balance?

Read my previous article, “The Twelve Days of the Nativity-DAY 1 MARY by clicking HERE